The current dam at the south end of Kennisis Lake was constructed in 2016. It is the latest iteration in a series of dams at this location dating back to the 1800s when a simple wooden dam was initially constructed in order to extend the logging season and ease the logging process in the area. Today the primary purpose of the dam is to help ensure water is available to feed the Trent Severn Waterway throughout the year and reduce the likelihood of flooding along the waterways between Kennisis and the Trent Severn Waterway.

There is a public boat launch area near the dam and a roller ramp to facilitate passage of small water craft from Kennisis Lake into the Kennisis River and the lakes beyond.

Parks Canada is responsible for the management of the dam and arranges the addition and removal of logs from the dam over the course of the year. Through communication received from Parks Canada and the Coalition for Equitable Water Flow (CEWF), the KLCOA provides regular updates through its website regarding historical and expected water levels on the Kennisis lakes. 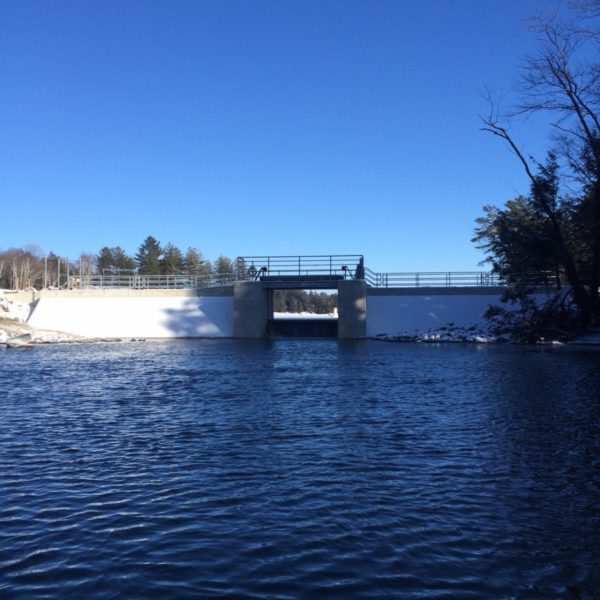 Background related to the construction of the new dam:

As of August 26, 2015 work had begun as per the planned schedule. The contractor selected by Parks Canada was Ross & Anglin Ltd.

On December 9, 2015 a further update was received from Parks Canada confirming that the project remained on schedule for substantial completion in Spring 2016.

Information on other TSW capital projects was provided by CEWF in February 2016.

Click on the links for the specifications and drawings for the new dam, along with a detailed environmental impact study and a geotechnical investigation.